The historical base map for the Bight of Benin hinterland was built using the WGS84/Pseudo Mercator coordinate reference system and open-source vector data from Natural Earth and DIVA-GIS.  Major rivers were emphasized to highlight historical inland trade routes. The map are at a 1:700,000 scale.

The basic data for this West Africa historical GIS project derives from a list of towns designed to operate with the QGIS TimeManager Plugin and R ShinyApp. Collating conflict data for pre-colonial, sub-Saharan Africa is inherently problematic because of missing data and a scarcity of contemporary sources. Nine core values are: ID, toponyms, political affiliations (if any), start and end dates, spatial coordinates, a conflict intensity scale and sources. The table displays data for the capital city of Oyo, which the emirate of Ilorin occupied four times after 1807 until its abandonment and relocation in 1836.The conflict intensity scale is encoded as a categorical variable with four levels: “0” indicates a period of zero conflict, “1” was a city under attack which might occur over several years, and “2” reflects a place’s destruction. New cities were founded or relocated; hence a “3.” I drew polygons of potential pre-colonial borders ebbing and flowing over time; and plotted a trade network.

Drawing boundaries of pre-colonial African states is methodologically problematic. As a result, the maps in this article integrate the concept of “fuzzy boundaries” as a method in which to illustrate unclear political lines. Despite high degrees of uncertainty, political boundaries illustrate a selection of major states pertinent to the focus of this experiment, including: Oyo (pink), Ilorin (yellow), Dahomey (green), Ijebu (blue), Badagry (peach), Ibadan (brown) and Abeokuta (grey). The data are available in our data repository at https://osf.io/h6upw.

Data from Voyages: The Trans-Atlantic Slave Trade Database illustrates the number of slave ships leaving the Bight of Benin on an annual basis. Whenever available, I assigned each ship an X and Y coordinate to appear beneath a port of embarkation. If the port of departure was not documented, I designated those ships as leaving from an “unspecified port.” The labels for each ship include the Voyages resource identifier (grey), as well as totals or estimates for the number of people on board each vessel (black). I used an SVG file of a ship to represent different destinations, i.e. Brazil (green), Cuba (red), Sierra Leone (black) and places in the United States and elsewhere in the Caribbean (peach). To reflect missing shipping data, each map includes annual totals for both documented embarkations and estimated departures. The data are available at Voyages: The Trans-Atlantic Slave Trade Database (www.slavevoyages.org).

While the Roman calendar works well for plotting shipping data, the military campaigns in the Bight of Benin interior typically occurred in the dry season due to the challenges of moving armies during the wet season. This temporal framework immediately raises issues as to whether or not the Roman calendar is an appropriate method for plotting conflict data on an annual basis. Often incomplete shipping data provides not much more than the year of the voyage, but rarely a month and/or day of departure off the coast of Africa. Aligning annual shipping data with the dry season, which spans between December and April, might not be possible due to the uncertainty of which month in the year the ship might have departed. 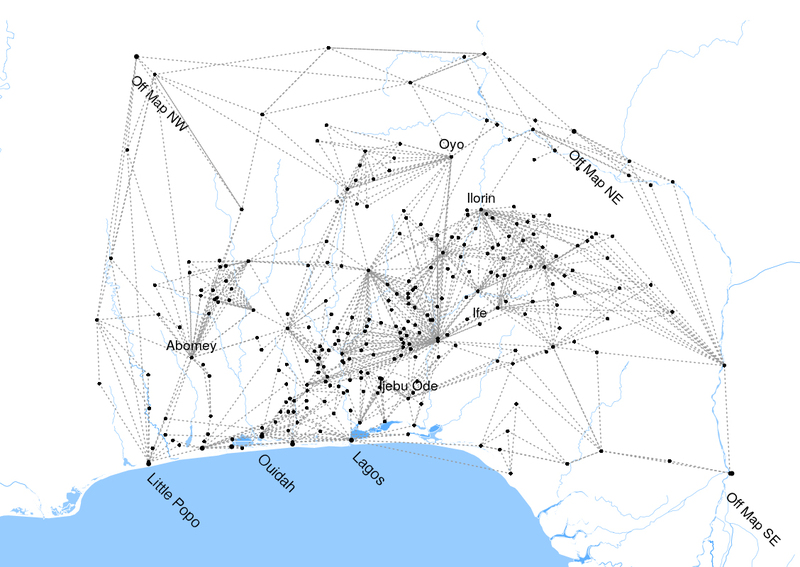 In collabortion with the University of Colorado's Laboratory of Interdisicplinary Statistical Analysis, annual maps of conflict illustrate the highest intensities of places of enslavement stemming from warfare in the Bight of Benin hinterland between 1817 and 1836. This recent breakthrough in compiling and mapping intra-African conflict has unlocked the possibility of modelling how conflict can generate enslaved individuals who are transported through trade routes to ports of sale; and hence provides a baseline to determine likely origins of Africans transported involuntarily to the Americas or elsewhere within Africa on an annual basis. This approach unravels internal population movements through an analysis of conflict alongside documented slave ship departures annually to estimate the probability of inland origins of enslaved people. Instances of conflict at specific places would have generated enslaved people within Oyo territory, who then would have resettled as refugees at new towns, such as Abeokuta or Ibadan; or involuntarily transported inland via different trade routes into other neighboring states, such as Sokoto or Dahomey; and also transported to the coast where tens of thousands boarded slave ships. This innovative methodology operates much like a watershed model in geology that predicts where precipitation collects and drains into a body of water; or like catchment areas in human geography that describe the geographical boundaries of populations comprising, as an example, medical practices. In essence, this model describes where individuals may have been captured and enslaved in conflict in a given time period; and then predicts the port of departure accounting for the possible resettlement patterns, whether voluntarily or involuntarily, and internal or external.

To make this research more widely available to a general audience, we created an interactive web application using the ShinyApp package in the R programming language and coded by Ashton Weins. To document the trade network among these cities, a stochastic matrix (also called a transition, probability, or Markov matrix) was compiled to describe the trade routes available as analyzed and debated in the historiography. The trade route stochastic matrix provides historical connections between cities, all of which are connected in some way to potential coastal and inland ports-of-sale. The above map displays cities within and around Oyo connected by the most likely trade routes. Such a depiction naturally translates to a graph-based approach to capturing the economics of the region. Our method for using historical data to estimate probabilities of origins of enslaved people during the collapse of Oyo from 1817--1836 works in four steps:

Data for this trade Matrix are available at https://osf.io/h6upw.