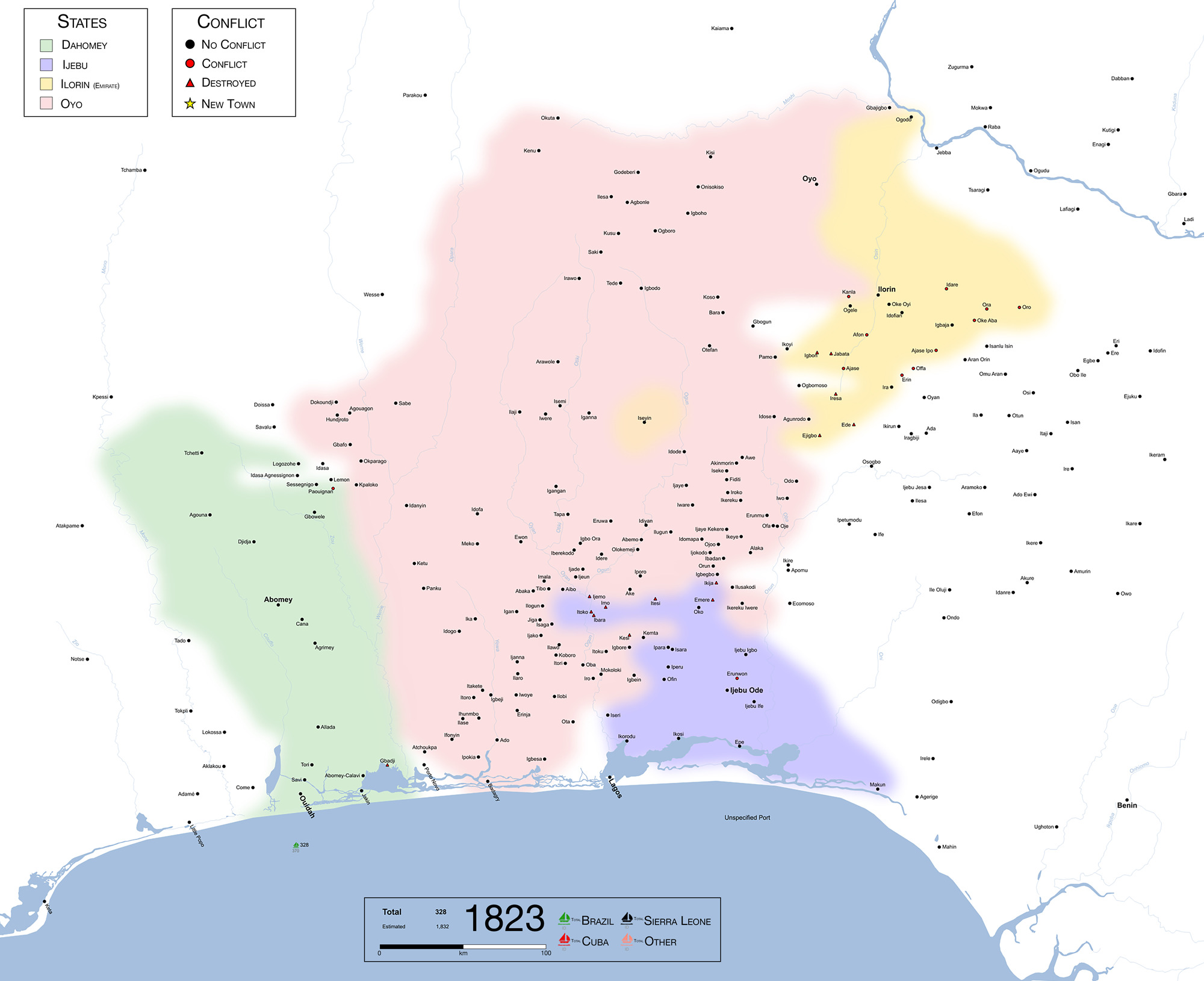 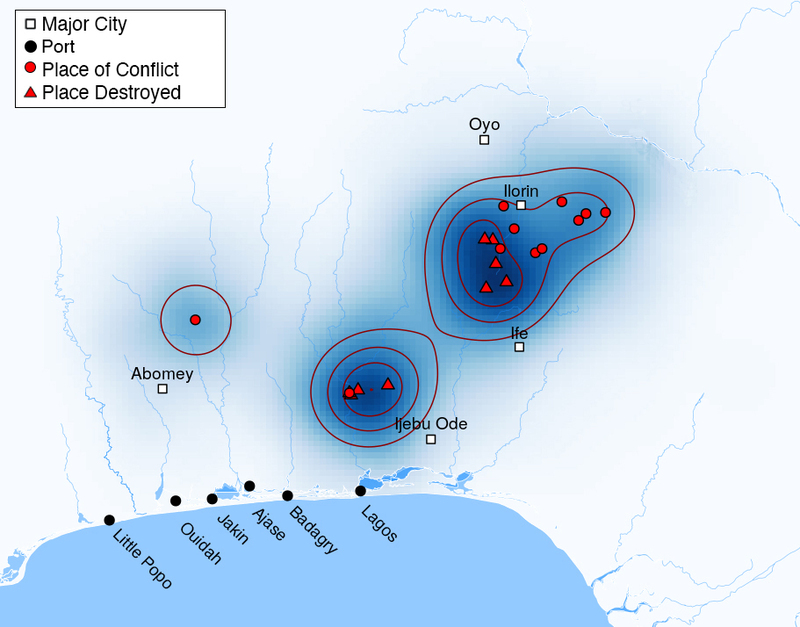 This year was pivotal for four reasons: 1) Ilorin became an emirate within the Sokoto Caliphate; 2) the defeat of Owu resulted in the systematic destruction of Egba towns; 3) Dahomey asserted its independence from Oyo; and 4) the Borgu towns of Nikki, Wawa, Parakou and Kaiama continued to raid the northwest. During these military offensives, slave trade departures decreased to the lowest numbers during the period of Oyo’s collapse.

As attempts to expel Muslims from Ilorin failed, Afonja was executed. Thereafter, Ilorin “represented an alien power whose object was the complete destruction of the Oyo kingdom.” The following quotes, which mostly derive from Samuel Johnson, summarize conflict around Ilorin:

Afonja had detached the Igbomina from allegiance to Oyo, and Ilorin forces had [destroyed] some important towns, such as Iresa, Igbon and Ejigbo. Also in possession of the Fulani, and in alliance with Ilorin, was the important commercial town of Raka [Ogodo], to the north-east of the capital. Raka [Ogodo] had been replaced by a new market town … probably to be identified with Agbonle. It appears, moreover, that most of the slaves coming from the north were by-passing Oyo altogether, being taken through Borgu and Dahomey for sale at [Ouidah]. Oyo organized a concerted attempt to crush the rising power of Ilorin … A first attack was beaten back at the battle of Ogele, near Ilorin, and Ilorin forces followed up by raiding into the Ibolo province. In this extremity, the Oyo sought external assistance against Ilorin, and secured an alliance of the king of Nupe, Etsu Majiya II … Nupe tradition records that his army included 4,000 mounted troops.

On the map, the Ilorin boundary shifts to a darker yellow to reflect its incorporation into the Sokoto Caliphate. 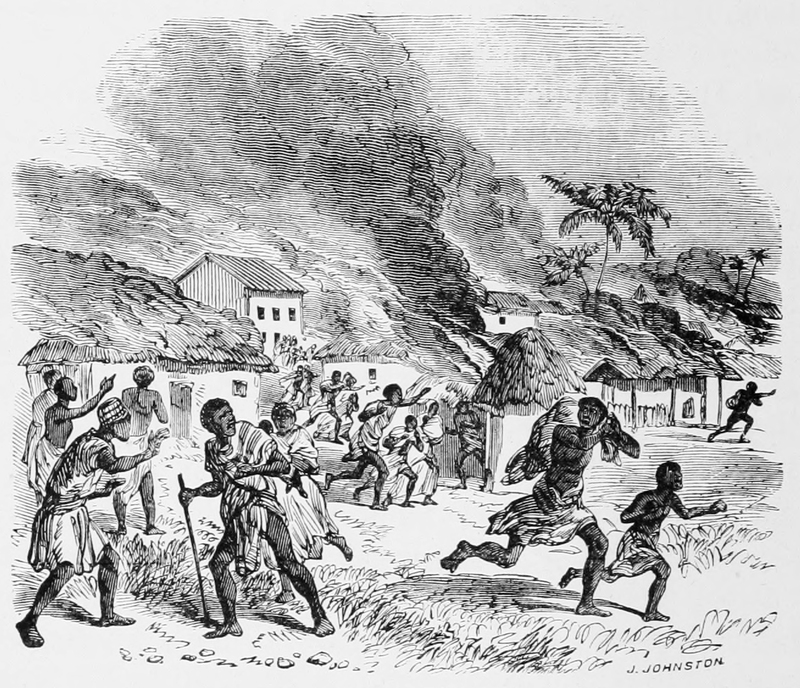 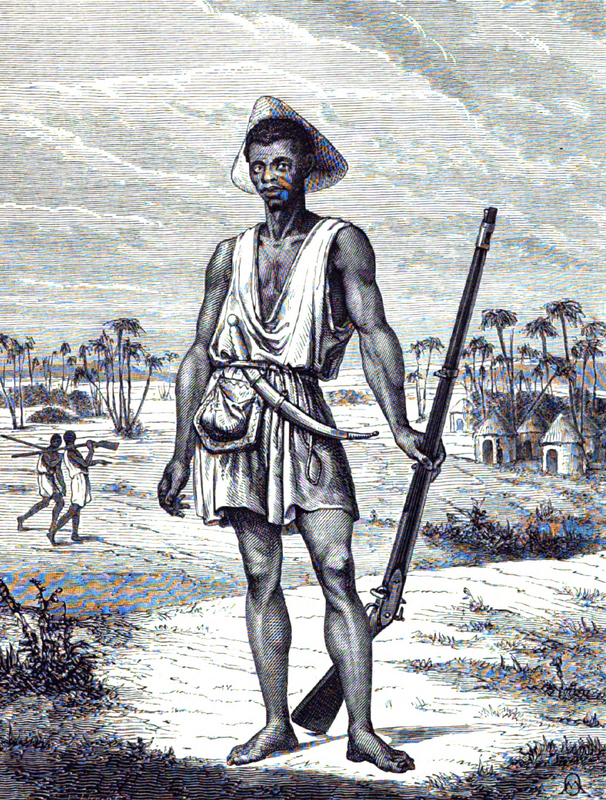 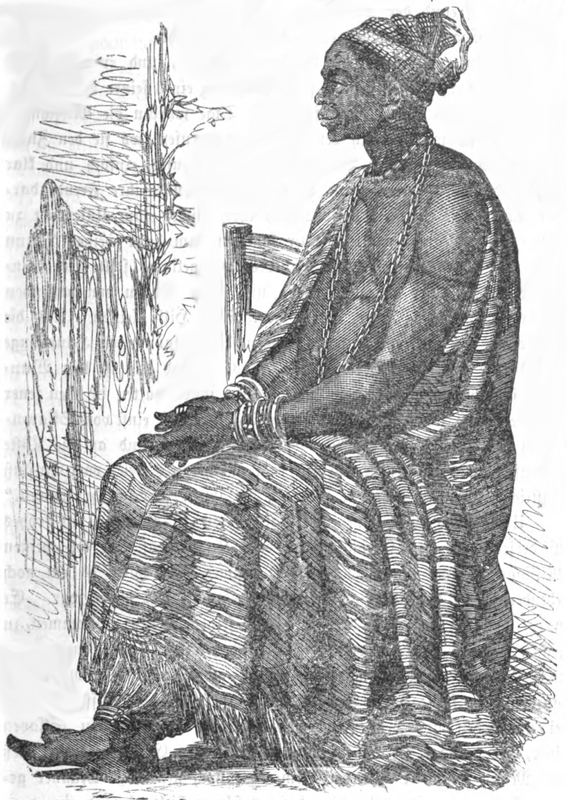 After the Owu wars, Ife and Ijebu forces formed an alliance with the Oyo refugees “to invade Egbaland, and one by one to destroy almost all the old Egba towns.” Due to imprecise records, it has been nearly impossible to evaluate the progression of the destruction of these towns. In his interviews with the chief of Abeokuta, Ogubonna, in the 1850s, Edward Irving learned that

From this town of Owu, the conquerors passed to Ikija … which was accused of having assisted Owu with provisions. From thence the conquering army of Ifes, Ijebus, Yorubas, proceeded against other towns of the Egbas. Kesin and Emere soon fell. They then settled in the Egba towns of Erunwon and Ijemo, and a part pitched on the road to Itoko. Here they found cause of quarrel with Ijemo, and destroyed it. Itoko next fell. Returning through the ruins of Ijemo they passed through Oba and Itoku to Ijeun.

Saburi Biobaku, as well as M. A. Mabogunje and J. Omer-Cooper, confirm this context and chronology. Since Ijebu was the primary aggressor, I have indicated the progression of the destruction of Egba towns with a blue boundary. After a town was attacked or destroyed, the blue border recedes and the base map remains white to illustrate the dissolution of town after town which is represented as occurring on an annual basis in the absence of more precise data.

To reflect the change in Dahomey’s independence from Oyo on the map, the kingdom’s boundaries shift from a dark pink to green. According to Law, “Gezo met and repulsed Oyo at Paouignan, in the Mahi country.” At the coast, Dahomey also attacked “Gbadji.” On modern maps, however, Ouédo-Gbadji is the elevated town built on stilts in Lake Nakoué. Following the campaign at Gbedjewin the year before, it is more likely, in my opinion, that Dahomey destroyed Gbadji to secure all of Lake Nakoué and further infringe upon Oyo’s interests around Porto Novo.

Amazingly, there was only one documented ship leaving Ouidah for Brazil with 328 people on board, which suggests the various military actions resulted in less people being transported to the coast at this time.