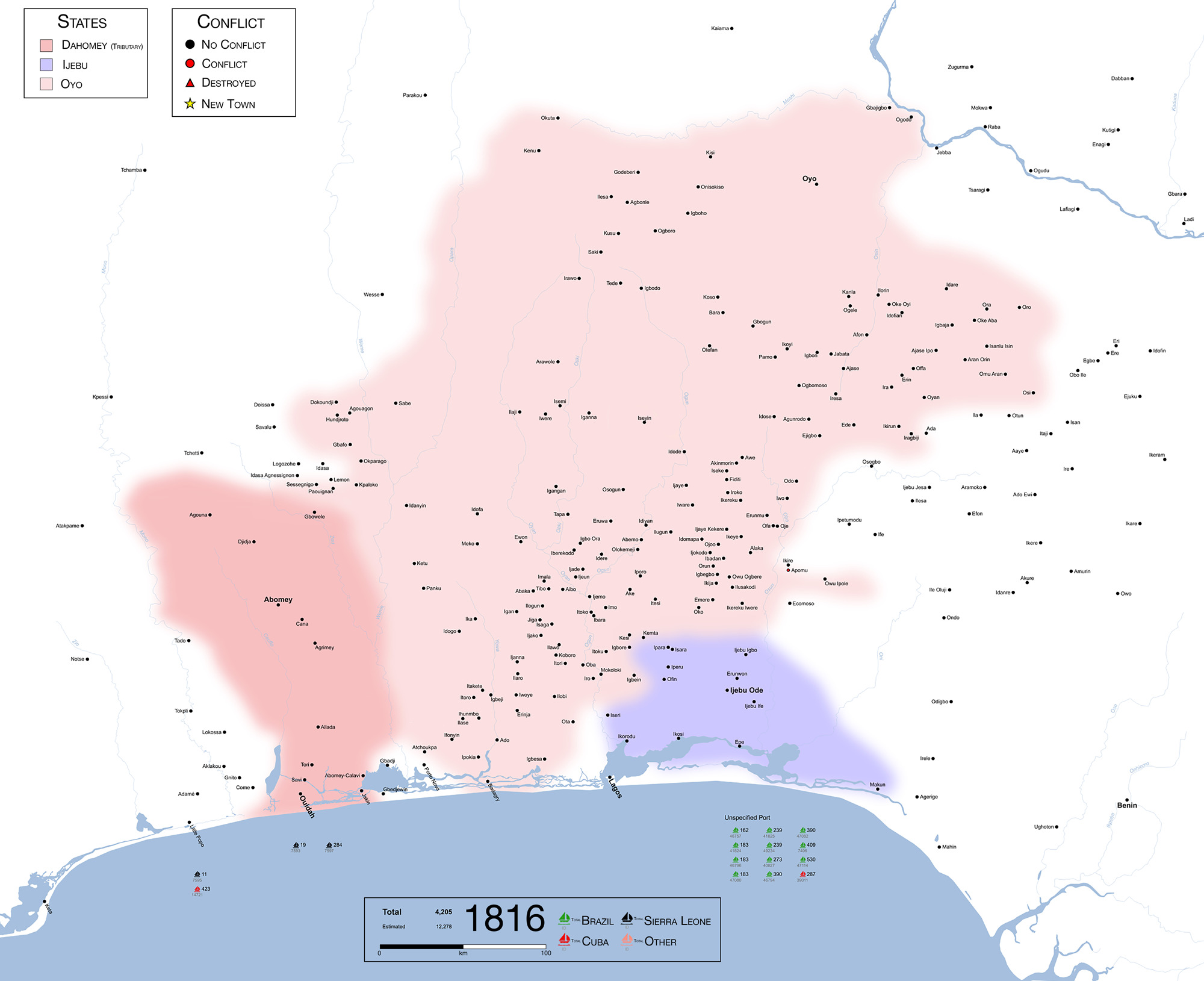 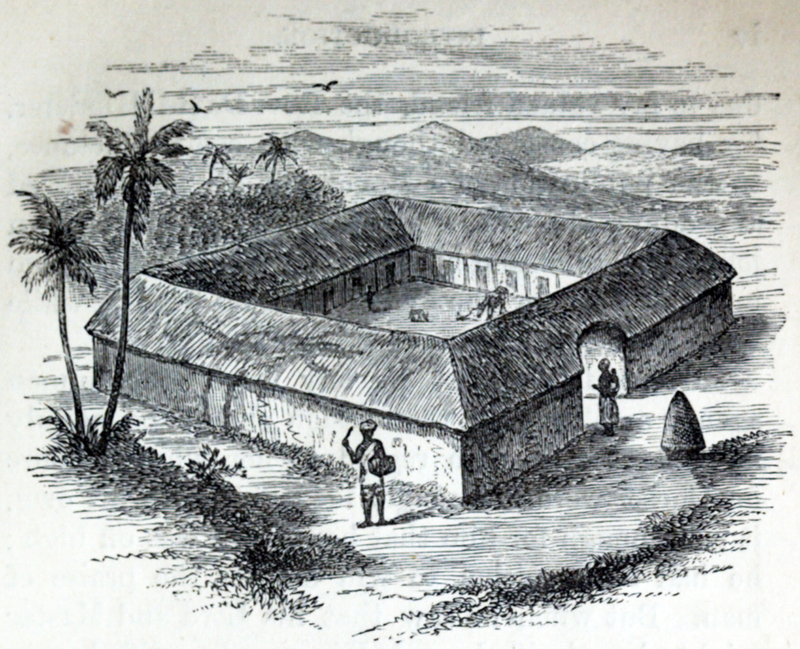 The turbulent era surrounding Oyo’s collapse is mappable through the extraction of geo-referenceable data, mostly from the secondary literature which extensively analyzes the key primary sources listed above. The sequential maps presented here begin in 1816, a year before a Muslim slave uprising at Ilorin in 1817 challenged the stability of the Oyo state. This slave uprising, which was inspired by the jihād emanating from the Sokoto Caliphate, triggered a constitutional crisis and severely weakened Oyo’s control over the region. In 1804, the political landscape among the Hausa states underwent major geo-political transformations, whereby Uthmān dan Fodio, who along with his brother, ʿAbdullahi dan Fodio, and his son, Muḥammad Bello, overthrew the established governments of the Hausa states, as well as Borno and Nupe. 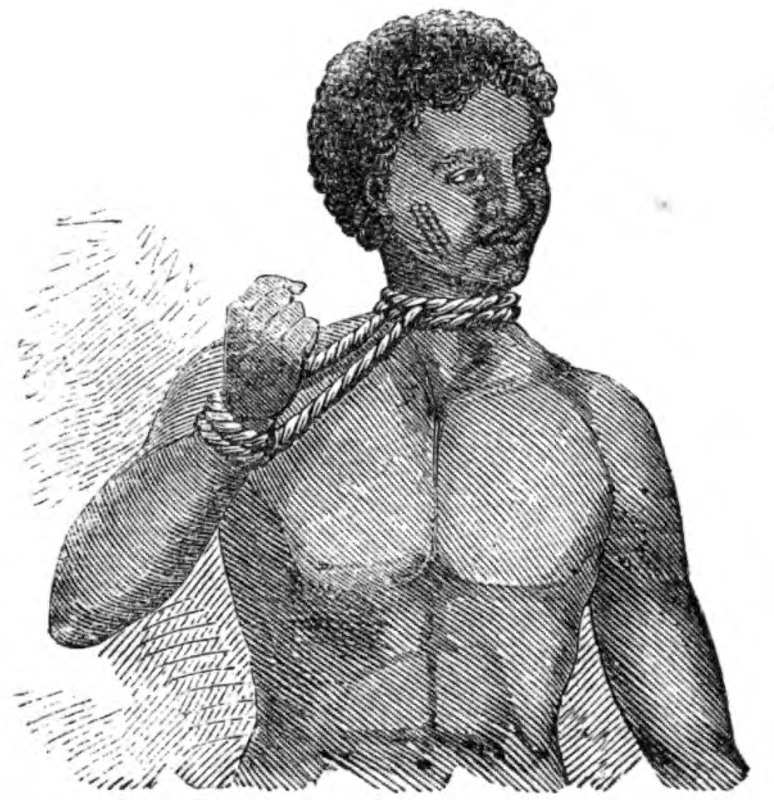 At this time, Oyo was already under pressure because of competition for the trade in slaves to the coast for sale into the trans-Atlantic trade. In c. 1807, Dahomey raids on Oyo’s principal port at Porto Novo had forced Oyo traders to sell slaves to Ife merchants in the market town of Apomu, located close to the Osun River. This shift in commercial activity led to conflict with Ijebu, whose merchants were kidnapping Oyo citizens and otherwise interfering with Oyo traders at Apomu. Ijebu merchants took slaves from the interior to the northern side of Lagos lagoon before sending them to ships moored off the coast. Over the next several years, Oyo sought to establish stability in the area by suppressing raiding and protecting its merchants, but this only provoked war with Ife and the subjection of a number of western Ife towns by Oyo’s ally, Owu.

The following sub-sections attempt to organize and explain the ensuing conflicts that occurred in and around Oyo starting a year before the Muslim slave uprising and ending in the year the capital city of Oyo was abandoned in 1836.

Despite the troubles around Apomu and the spread of jihād in the north, the kingdom of Oyo maintained control over its well-established trade routes. According to Kola Folayan:

One of the old routes linking Old Oyo with the Coast passed through the northern Egbado town of Meko … connecting Old Oyo with Ketu and thence with the coast at Porto Novo, a port which continued to serve as the outlet for Oyo …. Besides the northern Egbado route there was another one which linked Central and Southern Egbado with Oyo. Its southern terminus was also Porto Novo from where the route entered Southern Egbado either through Igbeji or Ipokia. Crossing the Yewa or Ado river the trade route then entered Central Egbado through Ilaro and Ijanna … with the slaves selling for about £ 3 to £ 4 per head. The trade route now passed out of Egbadoland through Igan or Ilogun to Iseyin, Shaki, Igboho, Kishi and thence to Oyo. From Oyo this same route continued through Raba on the Niger to Kano, the famous emporium of the Sudan.

While Dahomey had been tributary to Oyo since the early eighteenth century, that status came into question once Gezo became ruler of Dahomey in 1818 and ended in 1823. The Dahomey boundaries are reflected in the slightly darker shading of pink on the map. Ijebu never owed allegiance to Oyo, as represented by blue boundaries. 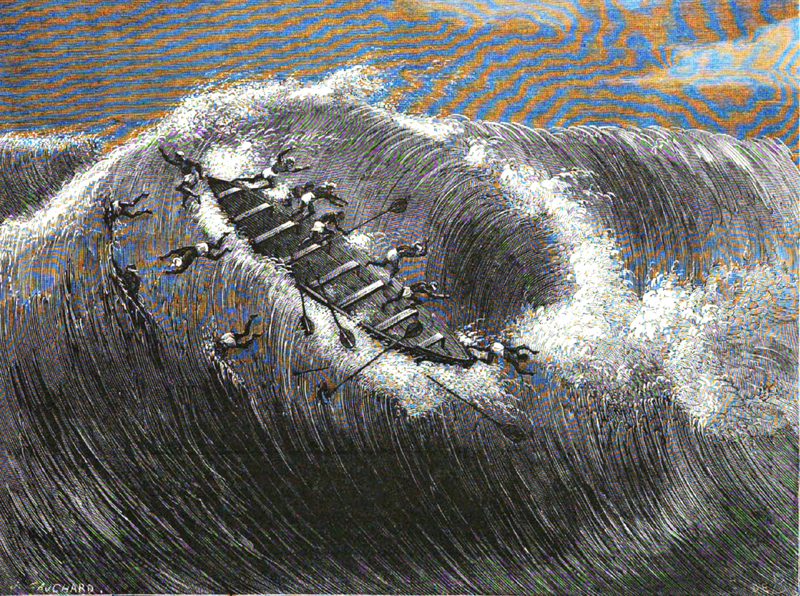 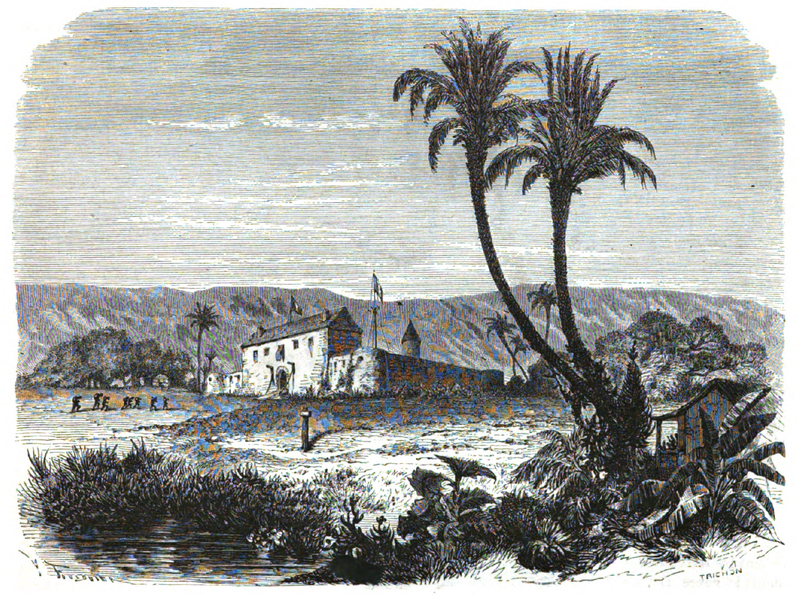 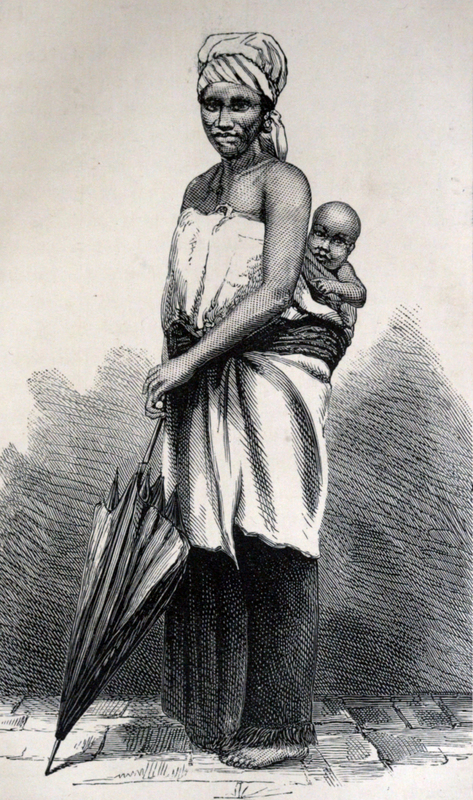 In 1816, sixteen documented slave ships left the coast, the majority of which went to Brazil, from mostly unidentified ports of embarkation. There were another three ships that the British seized and took to Sierra Leone and two others destined for Cuba. They left from Ouidah or Little Popo. The total number of known embarkations was 4,205 individuals, while estimates for all ships suggest there were more than 12,000 people leaving in this year mostly via Oyo trade routes, which was among the highest totals leaving the Bight of Benin in this study.