The Portuguese Bergantin, Aurora, left Bahia on 13 October 1818 and purchased 390 enslaved people at the Costa da Mina (no date recorded). This broad region corresponds to a coastal strip in the Gulf of Guinea encompassing the Gold Coast and Bight of Benin. While some ships leaving ports along the Gold Coast would not have carried Yoruba speakers, many of these ships would have been avoiding British blockades and likely traded further east in the Bight of Benin, most especially between Little Popo, Ouidah and Lagos. The captain, André Estácio de Souza, sailed the vessel, owned by Joaquim José Duarte da Silva, back toward Brazil as intended, when it landed at São Salvador da Bahia in 1819. Only 353 people survived the Middle Passage. For more information, see Map of 1818. 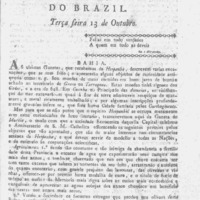 The available metadata on this archival resource includes: type of vessel, date and place of departure from Bahia, and names of the captain and owner (if known). However, there is much missing data since the record refers to outbound vessels and not inbound arrivals; hence, totals for number of enslaved people on board is absent. The Voyages database provides estimates for these ship totals based on the type of vessel, which denotes tonnage and ship capacity. This record contains sparse details about Yoruba speakers beyond usages of "Costa da Mina," which is an ambiguous geographic slave trading term for the Gold Coast and Bight of Benin.