The Zafiro (a) Ricomar was the thirty fifth conviction of a slave ship by the Havana Slave Trade Commission. There was "no legal evidence" showing when and where this Spanish brigantine began its journey. On 8 January 1836, under the command of José Uriate, 381 enslaved Africans boarded this ship at Ouidah and 12 people died during the middle passage. On 2 March, the HMS sloop Champion, under the command of Robert Fair, found this ship off the north coast of Cuba around N23°9 and W81°53. After the ship was run ashore, the master and several crew escaped and made several enslaved Africans "jump overboard [so that] (thirty-two) were in consequence drowned." Many people trying to escape were seized on the beach and only 188 people were taken to Havana. Upon arrival, everyone was placed into quarantine. During the trial, another 2 people died. On 12 March, the court condemned this slave vessel for sale and issued emancipation certificates for 186 people. There is no indication of anyone removed from Cuba. For more information, see Map of 1836. 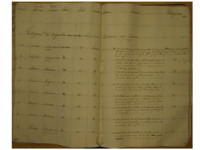