The Rosa was the twenty fourth conviction of a slave ship by the Havana Slave Trade Commission. This Spanish schooner, under the command of José Vilardaga, began its voyage at Santiago de Cuba on 2 May 1833. It set sail for Ouidah loaded with a cargo of wine, aguardiente and dry goods. On 19 November, this ship sailed from Africa with 293 people on board and 1 individual died during the middle passage. On 25 December, the HMS sloop-corvette Dispatch, under the command of George Daniel, detained this ship in the Atlantic Ocean around N3°49 and W33°13. Upon arriving to Havana, everyone on board was placed in quarantine even though the majority of people were in good physical health. By the end of the trial, another 3 people died. On 15 February, the court condemned this slave vessel for sale and issued emancipation certificates for 289 people. For more information, see Map of 1834.

On 18 February, the chief authorities of Cuba decided to relocate the people from the Rosa to Trinidad "in conformity with the conditions already determined upon... and in the same manner as in the past cases of the Joaquina and Manuelita." In this case, "the able bodied of both sexes [were] selected, and set aside." The Havana Slave Trade Commission also prepared a "surplus of provisions sufficient to maintain the negroes for 30 days after arrival." On 1 March, the Spanish schooner María Cristina, under the command of Juan Dardet, set sail to transport "194 emancipated negroes" - 97 females and 97 males - from Cuba to Trinidad. The court prepared a list of these people and their emancipation certificates accompanied them to Trinidad. This register of 194 people contained matching numbers to the Rosa register and it has therefore been possible to identify the people removed from Cuba. On 31 March, the Governor of Trinidad confirmed the arrival of 193 individuals because 1 male died shortly after arriving. He complained that these people were not in good condition "as those who were brought in the Manuelita." They had "only one suit of clothes and a Blanket, whilst those of the Manuelita had two suits, a Blanket and cap together with a wooden spoon." After disembarkation, they were "located in 36 lots of 6 each, one of 5, and eight very young females placed as Domestics in respectable Families." 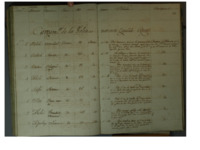