The Indagadora was the nineteenth conviction of a slave ship by the Havana Slave Trade Commission. This Spanish schooner, under the command of Ramon Casal, began its voyage at Havana and set sail for Lagos on 25 December 1831 with a cargo of cotton goods, aguardiente and gunpowder. On 14 May, the ship sailed from Africa with 138 people on board and 4 individuals died during the middle passage. On 22 May, Casal died from a fever that he caught on the coast of Africa and Bartolomé Alemañy took command of the ship. On 25 June 1832, the HMS schooner Speedwell, under the command of William Warren, detained this ship near the Isle of Pines around N21°30 and W83° and escorted it into the Bay of Havana to await trial. At the time of her seizure, there was sufficient water and provisions and nobody died during the trial. On 9 July, the court condemned this ship for sale and issued emancipation certificates for 134 people. For more information, see Map of 1832. 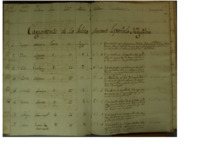